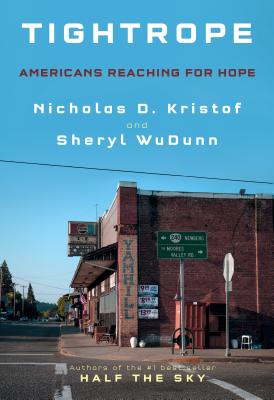 The Pulitzer Prize-winning authors of the acclaimed, best-selling Half the Sky now issue a plea--deeply personal and told through the lives of real Americans--to address the crisis in working-class America, while focusing on solutions to mend a half century of governmental failure.

With stark poignancy and political dispassion, Tightrope draws us deep into an "other America." The authors tell this story, in part, through the lives of some of the children with whom Kristof grew up, in rural Yamhill, Oregon, an area that prospered for much of the twentieth century but has been devastated in the last few decades as blue-collar jobs disappeared. About one-quarter of the children on Kristof's old school bus died in adulthood from drugs, alcohol, suicide, or reckless accidents. And while these particular stories unfolded in one corner of the country, they are representative of many places the authors write about, ranging from the Dakotas and Oklahoma to New York and Virginia. But here too are stories about resurgence, among them: Annette Dove, who has devoted her life to helping the teenagers of Pine Bluff, Arkansas, as they navigate the chaotic reality of growing up poor; Daniel McDowell, of Baltimore, whose tale of opioid addiction and recovery suggests that there are viable ways to solve our nation's drug epidemic. Taken together, these accounts provide a picture of working-class families needlessly but profoundly damaged as a result of decades of policy mistakes. With their superb, nuanced reportage, Kristof and WuDunn have given us a book that is both riveting and impossible to ignore.

The Ghost of Slappy (Goosebumps Slappyworld, #6)

The Ghost Next Door (Goosebumps, #10)

Lola Dutch I Love You So Much

Please Do Not Feed the Weirdo (Goosebumps SlappyWorld, #4)

Nicholas Donabet Kristof is an American journalist, author, op-ed columnist, and a winner of two Pulitzer Prizes. He has written an op-ed column for The New York Times since November 2001 and is widely known for bringing to light human rights abuses in Asia and Africa, such as human trafficking and the Darfur conflict. He has lived on four continents, reported on six, and traveled to 150 countries